Anyway, today I wanted to write about oats because 1) I like them and 2) I apparently like drinking the milk they produce (??? not sure about science on that one).

I haven’t yolked about it yet but if anyone knows me well they probably know that I love me a bowl of some fancy ass mushy oats. I call my creations Dopemeal. Great name, I know. But it hasn’t always been this way!!! I was a Oat Hater in my past life 😦

a LONG TIME AGO

I used to be a “texture” eater. As in I was able to excuse my pickiness by saying “I don’t love the texture,” or “it’s a texture thing for me hehe” which made me sound cute and like I’ve actually eaten these foods before, less like a 20-something scared of a damp oat. I’m better now. I eat oysters! Raw!

Beyond texture,  past me exclusively associated oatmeal with the instant packets that we’d have in the house sometimes. I’m barfing thinking about the maple and brown sugar one. Someone was eating this in the office the other day and I turned into the hulk and removed all my clothes. It’s the grossest scent in the world and takes me back to 8th grade because my 8th grade boyfriend’s house always smelled like maple syrup. It was 100% a Warm Vanilla Sugar scented candle but I am still convinced they kept Eggos doused in Aunt Jemima in the Glade PlugIns.

iS THIS 8th GRADE TANGENT YOU’RE ABOUT TO GO ON RELEVANT?

Absolutely not. 8th grade boyfriend sucked in general because he always would say, “why do you hate me?” and later claimed I broke up with him on the day of his dad’s death anniversary on purpose.  I’m having flashbacks of us on dates to the movies, me lookin’ HOT in my Hollister t-shirt that said “Green Eyed Goddess” (do not have green eyes). One time at the movies he smooshed his mouth against mine but didn’t like pucker or anything and then when I was in a good mood because I possibly just had my first “kiss” he was like, “why are you happy, did something happen?” and I said, “no.”

oK THAT WASN’T EVEN THAT INTERESTING?

Whatever. He’s married now and I still hate the smell of maple syrup, but I do like oatmeal! I love to make it on the stove, with water, and then add a bunch of toppings.

And it’s dope ass meal. It’s warm and filling and takes minimal effort but enough effort so you feel like you accomplished something.

i THOUGHT THIS WAS ALSO ABOUT OAT MILK?

SORRY YES OK! I keep talking about oat milk and I truly cannot get enough. It’s iced coffee season and I’m having a hard time transitioning to my normal black iced coffee because I want all of the oat milk!! I don’t care if I’m wandering into Basic Betch territory, it is the supreme non-dairy milk right now and should be recognized as such. I am ruined. Almond milk tastes like chunky nut sand. Soy feels 5 years ago. All aboard the Oatmobile!!!

Ok I guess that’s all I have to say about oats and oat milk.

I’ve spent a decent amount of time this week brainstorming restaurant/culinary related-puns for a tshirt design for work so in the spirit of hospitality/me havin a job I will create some trendy oat milk tshirts below. 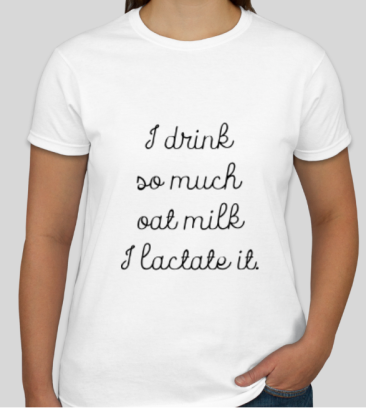 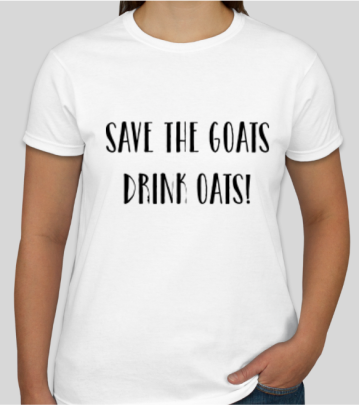 Hope you enjoyed this oat fest. I’m off to eat my dinner of pasta – using the remains of a box of spaghetti and a box of fettuccini, gonna go crazy and cook em together 🙂

3 thoughts on “Oat is the GOAT”